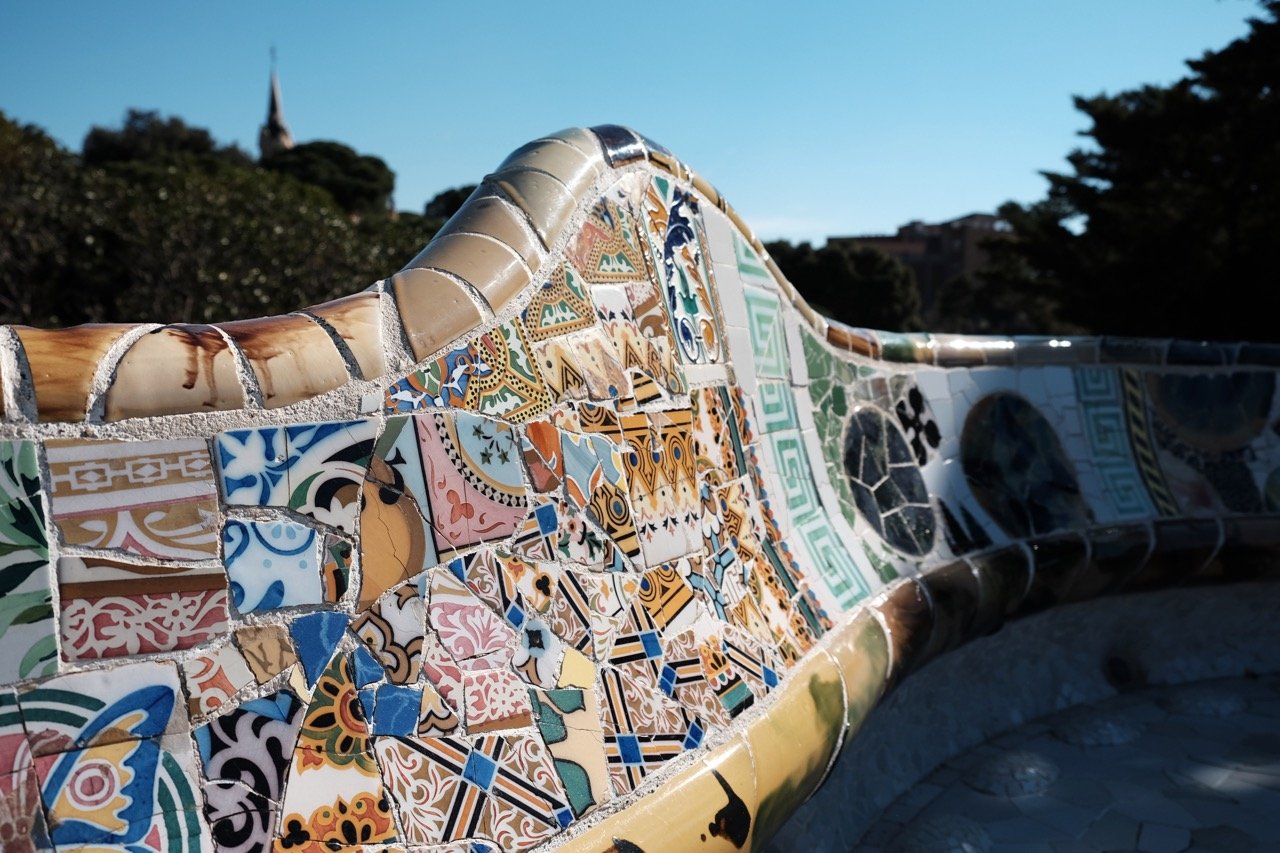 Walking tours are dangerous beasts. If you are on a good one, with an engaging guide, there's no better way to get to know a city. But if you find yourself on a bad walking tour, you'll very quickly wish that you'd decided to do anything else.

When I was recently in Barcelona, I decided to test my luck - and went on four different walking tours. I've got some recommendations to make, including an epic five and a half hour tour which might have been the best I've ever attended.

The first tour I went on was a free one which covered the city's Gothic Quarter by Runner Bean Tours. Eric (a Dubliner, who grew up about an hour's drive from me) walked us through the twisty windy narrow alleyways while introducing us to the history and myths of Barcelona's oldest area. The tour started at Plaça Reial, surrounded by palm trees filled with noisy screaming parrots. Eric quickly got us all to introduce ourselves, he explained that tips were appreciated but not expected (sure...) and asked us if there was anything in particular we were interested in learning. And off we went! 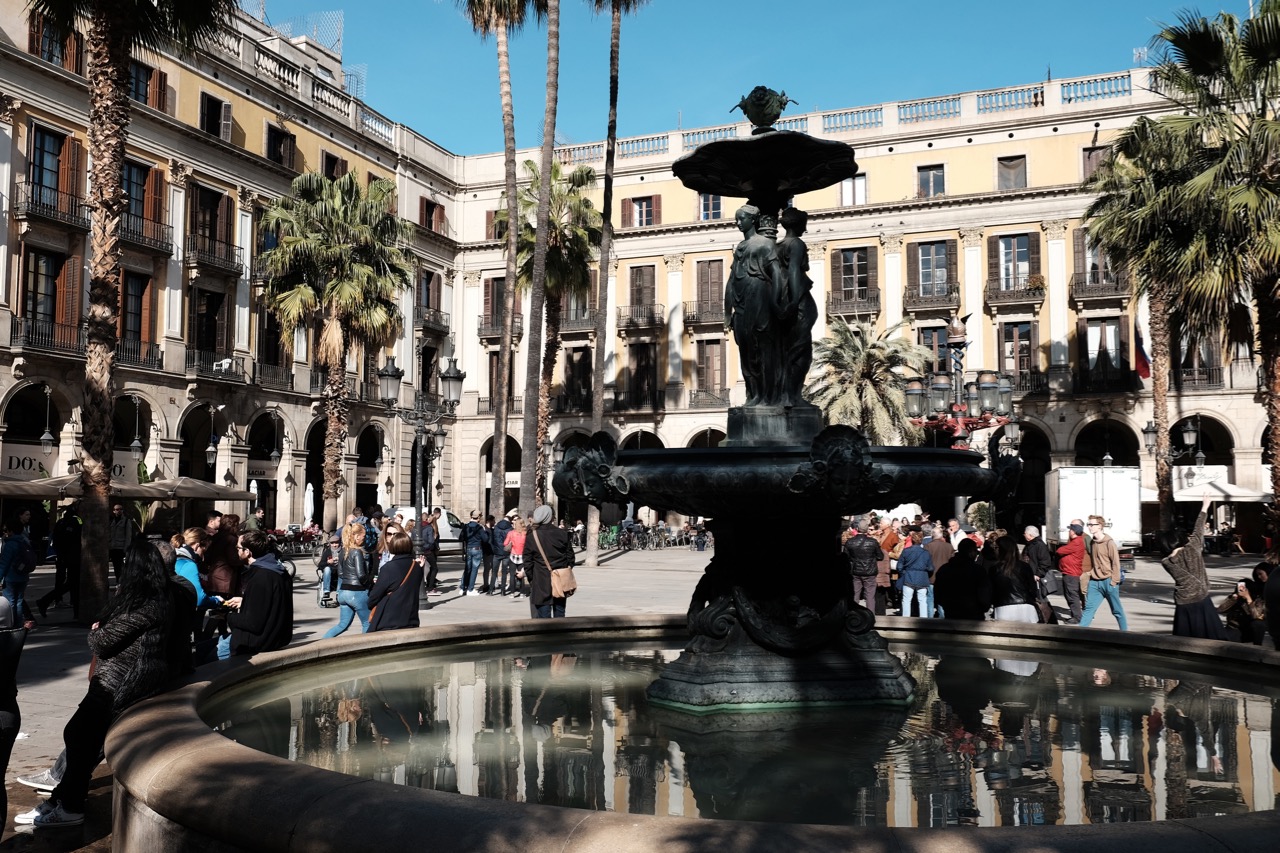 We stood in the old Roman forum looking up at two thousand year old columns, we discovered multiple buildings which had been moved from one area of the city to another, and we learned a dubious story about a giant who once threw a pine tree (which he had been using as a walking stick) at the city, impaling it like a giant javelin in one of the many small squares. Throughout the tour, Eric interacted with everybody, most especially three little kids who he somehow kept on-board for the entire tour. I've worked with children, and that takes some skill!

Before I set out on the tour, I knew that it was going to be free. I also knew that a tip was expected in exchange for the service. From a fair amount of mildly panicked Googling, it seemed that a reasonable tip for a free tour in Barcelona is around €10-€15. I was so happy with Eric's tour that I ended up tipping him €20, as did almost everybody else who attended.

Blood and Death in Barcelona

The second tour that I went on was another Runner Bean tour, this time prepaid. The group met at 7pm at the Arc de Triomf (which, we learned, didn't actually really represent anything. It was designed as a giant entryway for the 1888 Barcelona World Fair). The clocks had just gone back, so while this tour would usually run in the twilight, it was bright as day - but this didn't stop Ali from introducing us to Enriqueta Martí, the Vampire of Barcelona, a particularly grizzly women who was supposedly a serial kid killer, kidnapper, and who sold children to the rich and famous.

We also learned about how a criminal's method of education differed depending on their class. Thos who were poor were made an example of - they were publicly hung, and often took up to twenty minutes to die. Hangmen would sometimes hump off ladders onto the shoulders of the condemned, if the executioner was feeling particularly kind and wanted it to be over quickly. If you were high and mighty in society, you were more likely to be strangled with the Spanish Garrotte - a metal band which was wrapped around your neck and tightened, while you were strapped to a post. This was thought to be a more 'humane' and 'private' method of execution, although it could also take a while to do its job. The Spanish Garrotte was later updated to include a sharp spike at the base of the condemned's neck, which could speed death up to seconds rather than minutes. How kind.

We also spent time covering the Spanish Inquisition. To be honest, I knew nothing about this other than what I had 'learned' from Monty Python, and Ali made a very convincing argument that it was actually nowhere near as bad as we are all lead to believe. In Barcelona, roughly 1% of trials resulted in an execution, although there were many more tortures - and the methods of torture were particularly heinous. I won't spoil the full story in case you decide to go on this tour yourself, but if you'd like to know more about death and torture throughout history (in particular in the style of the Romans), check out the Hardcore History episode, Painfotainment.

This tour also ran for two and a half hours, and while I thoroughly enjoyed it, I felt that it didn't quite have the same level of insight as the Gothic Quarter tour did. It felt like a collection of (incredibly interesting) stories and snippets of history, while the Gothic Quarter did that while also tying everything together. 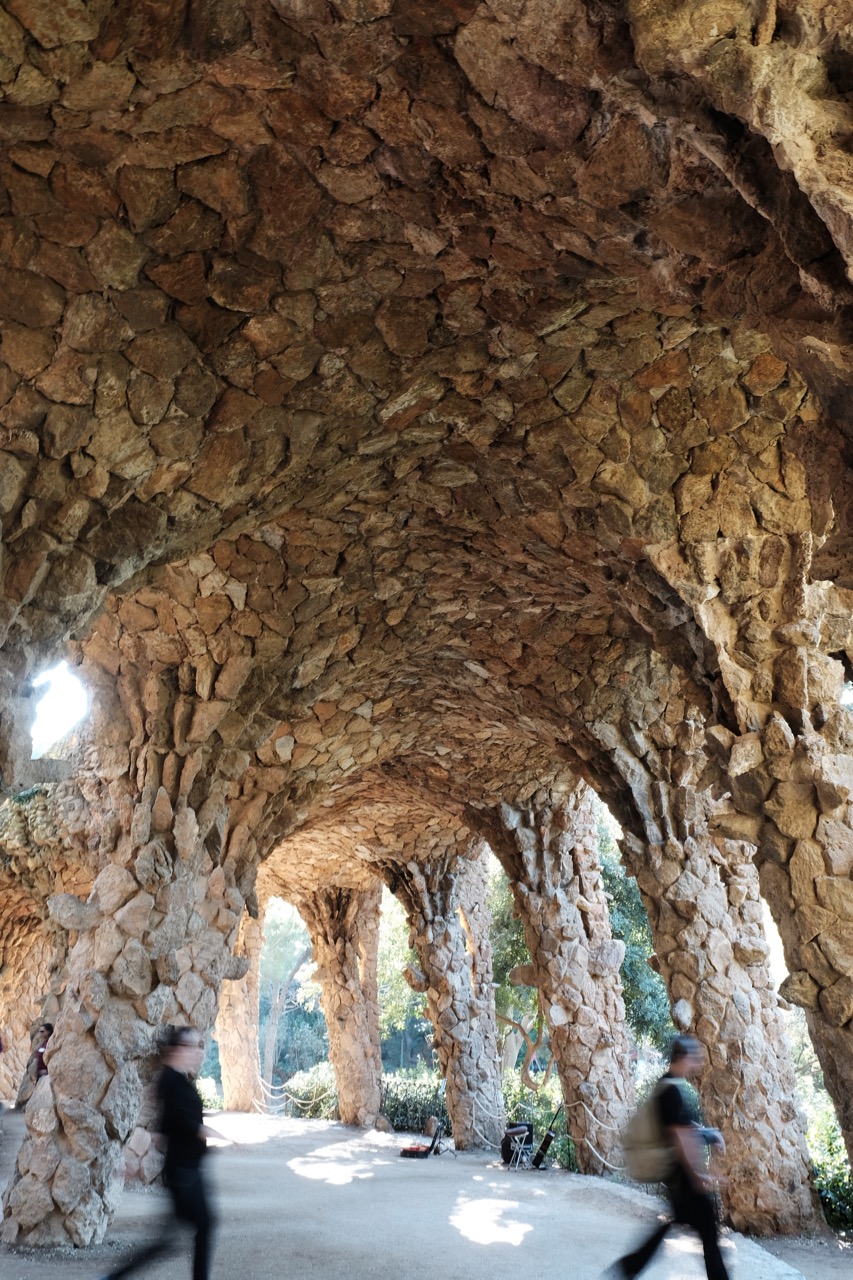 Next, I visited Park Güell, which has got to be the single most Instagrammed place in Spain. If you've seen a picture of a mad looking building covered in broken tiles, chances are that it was taken here, the architect Gaudí's attempt at building an estate for the rich and famous of Barcelona in the 1900s. Unfortunately the project was a hundred years ahead of its time - the rich and famous weren't quite willing to move an hour outside of town, half way up a mountain, oh, and also, commission and build their own houses. As a result, the project was abandoned once most of the communal areas were completed (including a school, gate house, open air dance hall, and a weird ergonomic seating area). 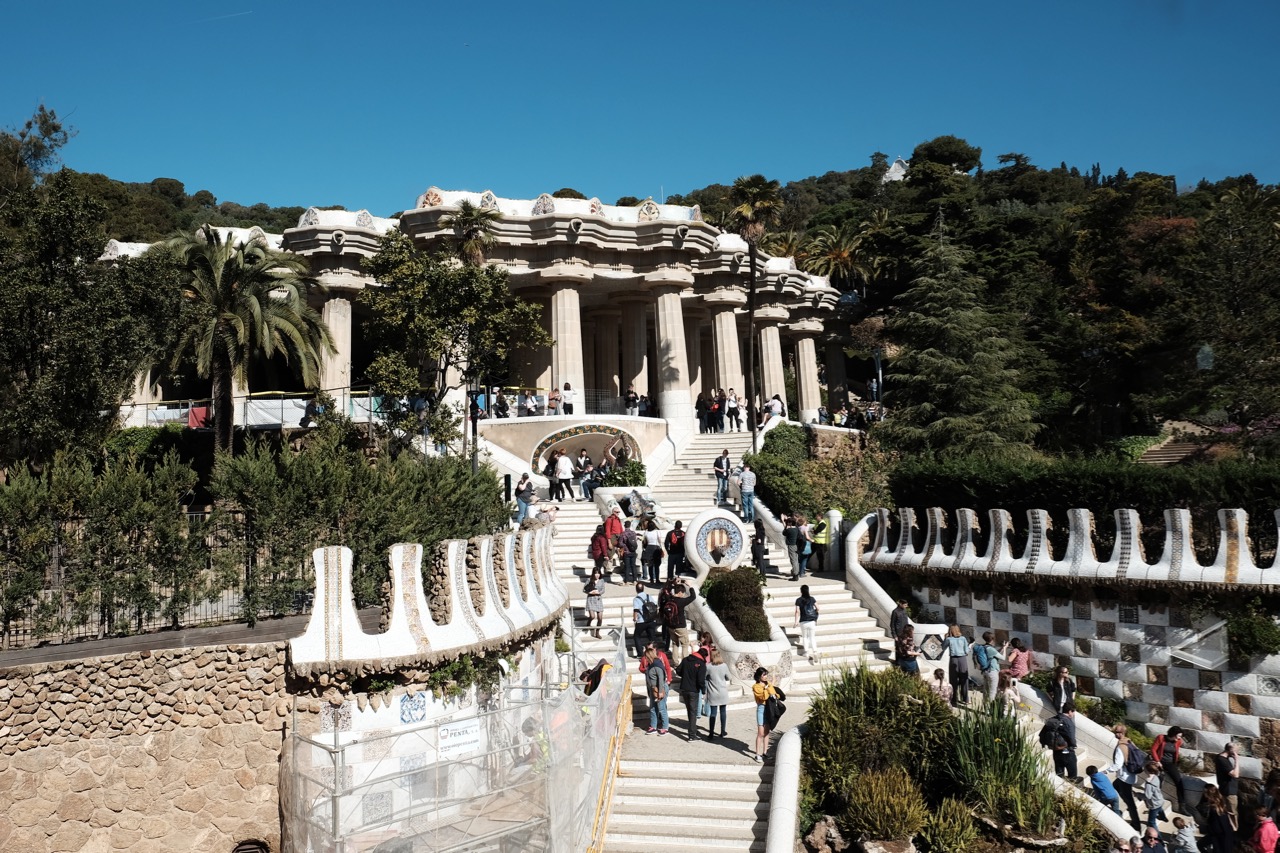 I'm in two minds about this tour. On the one hand, if I hadn't paid the extra €7 to take it, I'd probably have walked around the rather small "Monumental Core" in sheer confusion - it's a pretty bizarre sight. To be honest, as amazed as I was by the architect's absolutely enormous Sagrada Família church, which is undoubtably a masterwork, I don't really buy into the 'genius' of Park Güell. On the other hand, I'm unsure if I learned much extra from the tour than if I had done an ounce of research. If you are super into architecture, this tour might be worth the money. I'm not, and even as I write I can't remember a single interesting fact from the tour, other than that the loud parrots which cover Barcelona are mostly seen as a pest.

Five and a half hours on the Spanish Civil War

The final tour was by far the best of the lot - an epic length ramble through the city (with stops in two pubs along the way for short lectures) about the Spanish Civil War. I'm not going to do Catherine, our mind-bogglingly knowledgeable guide, the disservice of trying to summarise the tome of information that she imparted during her marathon of storytelling. 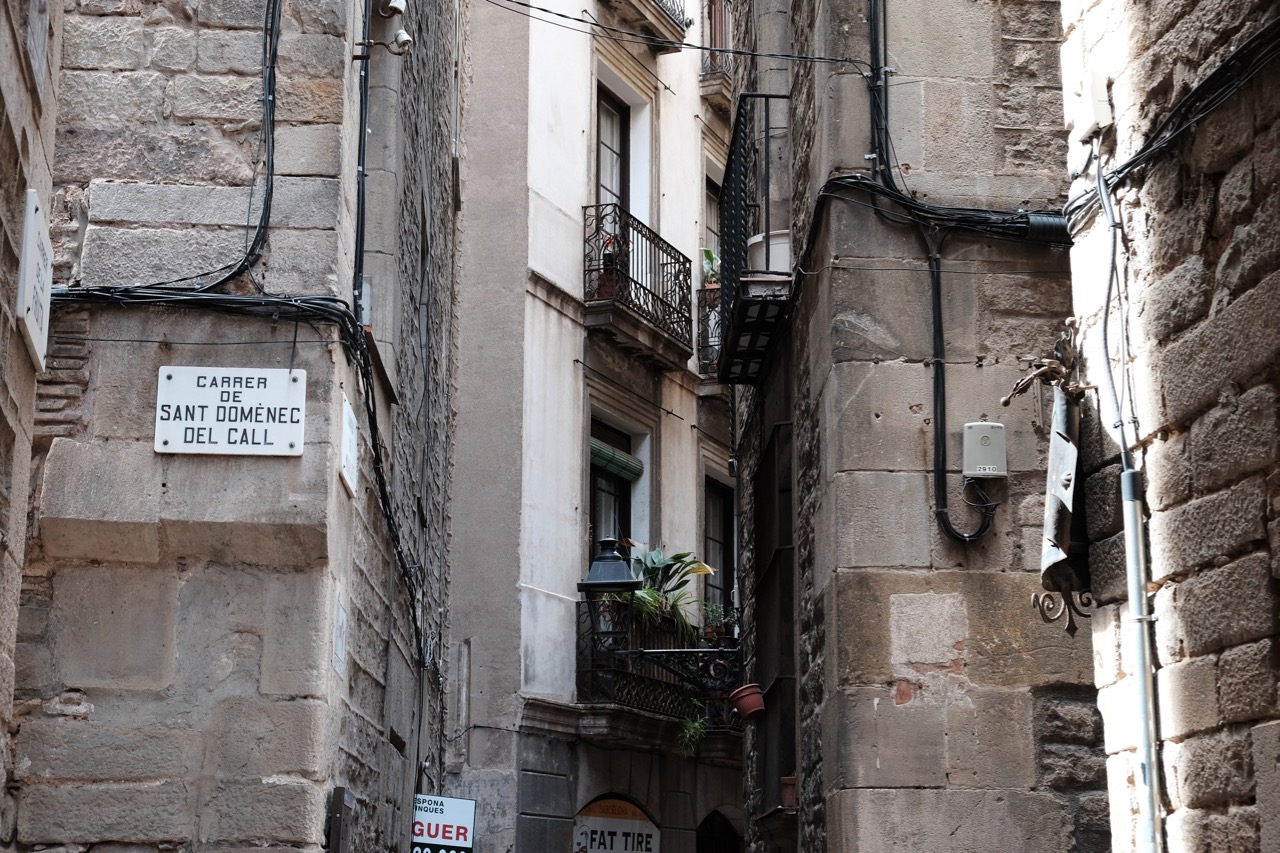 The tour focused primarily on the main groups who were fighting the Spanish Civil War in Barcelona, why they all got pulled into the war against Franco by the Spanish government, and what happened when they all started fighting each other. I'm unafraid to admit that going into this tour, I knew pretty much nothing of the bloody history of the Spanish civil war, but thanks to Catherine's incredible teaching I now feel that I could actually give a fairly generalised timeline of events, and she has inspired me to do a whole lot of reading on the subject, starting with George Orwell's Homage to Catalonia. (Orwell, Catherine explained, wanted to get involved in the Civil War, but ended up on the front-lines against Franco, and basically didn't do a huge amount during his years in Catalonia, before getting shot and heading home).

Of the four tours that I did, this Spanish Civil War tour is the one that, if you are going to Barcelona for a few days, I strongly recommend that you take. Even if you have barely a passing interest in the region's history, you will learn an incredible amount about the city, its politics and Catalan culture today.

Have you taken any particularly good or bad walking tours? I'd love to hear about them in the comments!

Thanks for reading! I took way more photos than the few I posted here - if you'd like to see them head to my Instagram where I'll be posting them over the next few weeks.